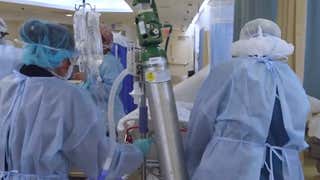 Climate change may have played a role in the emergence of the coronavirus pandemic by helping create an environment that drove several species of virus-carrying bats to southern China, according to a new study.

“As climate change altered habitats, species left some areas and moved into others – taking their viruses with them,” Robert Beyer, a researcher in the University of Cambridge’s Department of Zoology and lead author of the study, said in a news release. “This not only altered the regions where viruses are present, but most likely allowed for new interactions between animals and viruses, causing more harmful viruses to be transmitted or evolve.”

Among those, Beyer and his colleagues say, might have been SARS-CoV-2, the novel coronavirus that causes COVID-19.

(MORE: A New Strain of the Flu May Have Exacerbated Last Year’s Flu Season, Researchers Say)

The study, published Friday in the journal Science of the Total Environment, found that an additional 40 bat species have moved into China’s southern Yunnan province in the past century, bringing as many as 100 types of bat-borne coronavirus with them.

The bat boom was caused by climate change impacts driven by greenhouse gas emissions, including warmer temperatures, more sunlight and more atmospheric carbon dioxide, according to the paper. Those impacts changed the growth of trees and plants in Yunnan province and adjacent areas in Myanmar and Laos, attracting bats from other areas.

While the exact origin of SARS-CoV-2 is still undetermined, scientists widely believed it was passed from bats in southern China to pangolins, which were then sold at a market in Wuhan, China, where the World Health Organization announced the first cases of COVID-19 in January 2020.

Pangolins are highly sought after in China and some other countries, where their meat is a delicacy and their scales are used in traditional medicine and folk remedies, according to the World Wildlife Fund.

Beyer said the study’s result could help further narrow down the specifics of the virus’ emergence.

“Understanding how the global distribution of bat species has shifted as a result of climate change may be an important step in reconstructing the origin of the COVID-19 outbreak,” he said.

And that could be key in investigating future viruses. The study showed that climate change also drove increases in bat populations in parts of Central Africa, Central America and South America.

The researchers say more work needs to be done before making a definitive connection between climate change and COVID-19.

“Our paper is a long way away from saying the pandemic would not have happened without climate change,” Beyer told Agence France-Presse. “But I find it difficult to see that this climate-driven increase in bats and bat-borne coronaviruses make something like this less likely to happen.”

The first death from coronavirus in the United States occurred one year ago on Feb. 6, 2020. Since then, the disease has killed more than 2.3 million people worldwide, including more than 457,000 in the U.S.

For the latest coronavirus information in your county and a full list of important resources to help you make the smartest decisions regarding the disease, check out our dedicated COVID-19 page.

The Weather Company’s primary journalistic mission is to report on breaking weather news, the environment and the importance of science to our lives. This story does not necessarily represent the position of our parent company, IBM.